Updated January 2015 : Also possible, and easier, to use the Variable Manager from the SDL OpenExchange (now RWS AppStore) for this.
I mentioned in a previous post that it wasn’t possible to import long variable lists into a Studio Translation Memory using the desktop version of Studio. You can do this with GroupShare, but the ability to do this in the desktop version is a work in progress.
Well that wasn’t quite true and as I’ve been preparing for some roadshows and events that are coming up this month I figured out a simple workaround using SDL Trados 2007 Suite.
The principle uses the ability of Studio to upgrade a Trados 2007 Translation Memory and migrate all the language resources at the same time, so segmentation rules, abbreviation lists, variable lists and ordinal follower lists.  So, here’s what I did… I have a Studio Translation Memory, in this case English to German, and it has no variables at all. I also have a text file containing thousands of post codes which I would like to be variables in my Studio TM.  So first I create an empty Translation Memory using SDL Trados 2007 Suite and I copy and paste the list of variables in one go into the variables list in Workbench here (no lessons on how to use Workbench here… hopefully not needed!): 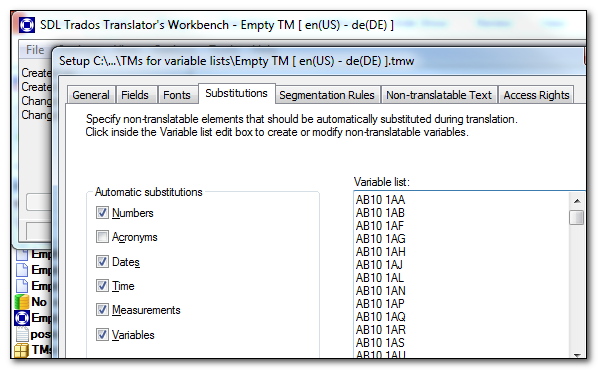 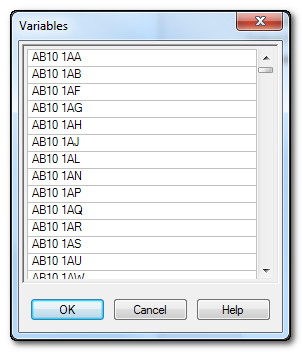 12 thoughts on “Working with Variable Lists”