I first wrote about the Glossary Converter on September 17, 2012… over three years ago.  Not only is it a surprisingly long time ago, but I still meet people at every conference I attend who have never heard of this marvelous little tool, and in some cases never heard of the OpenExchange either.  So when I toyed with the idea of writing an article about Xmas coming early and talking about the OpenExchange and all the goodies inside, part of me couldn’t resist writing about this tool again.  In the three years since it was first released it’s morphed beyond all recognition and today it’s awash with features that belie it’s appearance.

I like to take a little credit for the emergence of this tool because back in 2012 I asked around trying to get someone to create one so that it was straightforward for anyone to create a MultiTerm Glossary from a simple two column spreadsheet… the sort of glossary that most translators use for their day to day needs.  I was over the moon when Gerhard (the developer) was interested and created the tool I wrote about back then.  But I can take no credit whatsoever for what the tool has become today and it’s well worth revisiting!

END_OF_DOCUMENT_TOKEN_TO_BE_REPLACED

By now I think we’ve discussed the import of an IATE TBX into CAT tools as much as we can without going over old ground again.  But if you’re reading this and don’t know what I’m talking about then perhaps review these two articles first:
What a whopper!  – which is all about the difficulties of handling a TBX the size of the one that is available from the IATE download site.
A few bilingual TBX resources – which is a short article sharing a few of the TBX files I extracted for a few users who were having problems dealing with the 2.2Gb, 8 million term whopper we started with.
So why am I bringing this up again?  Well I do like to have the last word…  don’t we all… but this time I wanted to share the work of Henk Sanderson who has put a lot of time and effort into breaking the IATE TBX into bite sized chunks and at the same time cleaning them up so they can be more useful to a translator.  I also wanted to share the successful import of the complete original TBX from IATE directly into MultiTerm Server:
END_OF_DOCUMENT_TOKEN_TO_BE_REPLACED

Since writing my last article on handling large TBX files I have extracted a few TBX files as language pairs only from the very large TBX provided by IATE and thought I would share them here for others to use.  If you want a specific language pair from the 25 languages within the IATE TBX then drop a note into the comments.  I can’t guarantee I’ll do it quickly, but as the process is fairly straightforward I will add them from time to time.
All of the files below are extracted from the following original: Download IATE, European Union, [2014] END_OF_DOCUMENT_TOKEN_TO_BE_REPLACED

I love this cartoon with the husband and wife fishing on a calm weekend off.
“Honey, I got a big one on!”
She’s hooked a whopper and he casually responds in the way he always does when she occasionally catches a fish on Sunday morning.
“Yes dear, uh huh…”
The equipment they’ve got, from the boat to the fishing rods, is all perfectly suitable for their usual weekend activities but hopelessly inadequate for handling something like this!  Little do they know that the whopper under the surface is going to give them a little more trouble when they try to bring him on board!
END_OF_DOCUMENT_TOKEN_TO_BE_REPLACED 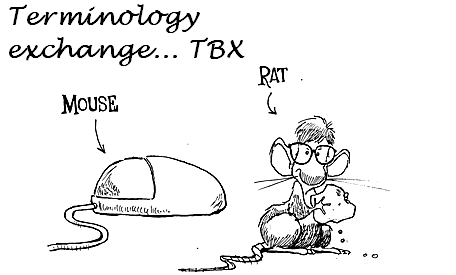 … and this will be particularly good news for users working in SDL Trados Studio with SDL WorldServer.  Today the Glossary Converter was updated on the OpenExchange with a number of very cool enhancements.  These are support for users still working with SDL MultiTerm 2009, support for Microsoft Excel workbooks containing multiple worksheets, Spanish user interface, a number of smaller usability improvements and bugfixes and the one I’m most interested in here… support for TBX.  TBX is a TermBase eXchange format that was developed for sharing terminology between different tools.  The reason I’m so interested is because if you want to use a TBX file in Studio as a resource for your AutoSuggest then you have to use MultiTerm Convert in order to create a MultiTerm TermBase.  This is not too difficult, but it can take a little work if there is a complex structure in the TBX… and of course it can take a little while as it’s at least a two-step process.  So making this easier would be great.
END_OF_DOCUMENT_TOKEN_TO_BE_REPLACED