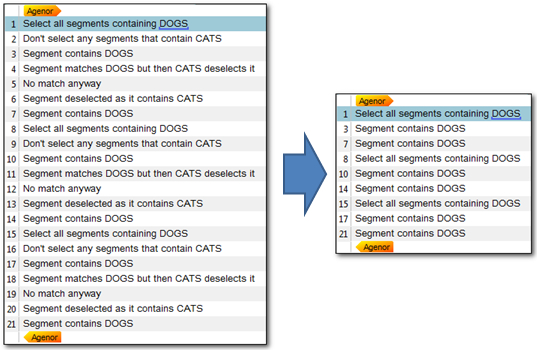 That looks complicated doesn’t it?  But help is at hand if you have Regex Buddy (I know I plug this a lot but it’s very handy) because this will explain the expression for you and help you to write more, and create variances on this.  Basically this is what it does:
^
Start at the beginning of the segment
(?=)
This is a Positive lookahead and it means take a look in front of the current position and match the regular expression inside these brackets
.*
We’ve seen this before.  The dot means find any character and the * means find between zero and unlimited times… so keep looking for anything until you are told otherwise

This is called a word boundary, and by placing the word you are looking for inbetween this syntax you can ensure you find complete words.  So I was looking for DOGS and CATS like this DOGS and CATS
?:
This one is not really needed as the expression will work without it.  When you place things inside brackets (apart from the lookaheads themselves) this creates a backreference… we used these before for search and replace… and adding the ?: tells the expression I don’t want to store the backreference as I don’t need it, so it might help the expression to perform faster for very large files.  For most files you may never notice the difference.
(?!)+
This part, (?!), is called a negative lookahead and it means take a look in front of the current position and make sure you cannot match the regular expression inside these brackets… so in this case don’t match CAT.  The + at the end makes it “greedy” similar to the star, but this time between one and unlimited times.
$
This one you also know by now, this just means carry on with whatever you were doing (being “greedy”) until you get to the end and stop there.
So when you look at it like this it’s not so hard to follow… I think, and it might be a useful one to write down and remember for the future?
Here’s a few other useful expressions I stored in a spreadsheet for safe keeping, I hope you find them useful?  Maybe you can add the useful ones you have into the comments for others to share too: 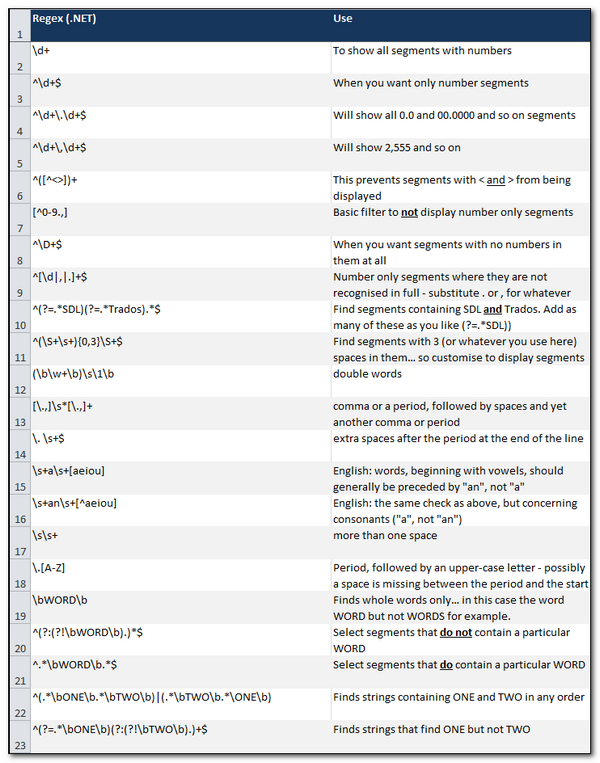