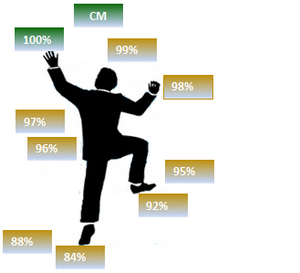 I’m onto the subject of leverage from upgraded Translation Memories with this post, encouraged by the release of a new (and free) application on the SDL OpenExchange (now RWS AppStore) called the TM Optimizer.  Before we get into the geeky stuff I want to elaborate on what I mean by the word “leverage” because I’m not sure everyone reading this will know.

Let’s assume you have been a translator for years (English to Chinese), and you always worked with Microsoft Word and Translators Workbench.  TagEditor came along, but you didn’t like that too much so you kept working with Word and Workbench.  It had its problems, but until Studio came along and in particular Studio 2014, you were still quite happy to work the same way you had for years.  But now you wanted to buy a new computer, and you really liked the things you’ve been reading about Studio 2014 so you took a leap and purchased a license of Studio.  The first thing you want to do is upgrade your old Workbench Translation Memories so they could be reused in Studio.  You’ve got around 60,000 Translation Units in one specialised Translation Memory and you really need to be able to have this available as soon as possible to help with a job you know is just around the corner.  You upgrade the Translation Memory and this worked perfectly!

There were 182 errors reported, but when you looked into the details this was just some segments that only contained source and no target, some number only segments and some duplicates.  You knew that of course Studio doesn’t need these things and so expected a slight reduction… actually you were ready for more than this so everything looks great so far.  You did have one other error reported in the details and this was “TagCountLimitExceeded”.  I cut this screenshot down to fit it in but the number of lines in the target compared to the source has increased some 20x for all the errors reported this way (the sea of blue and red text are all tags):

In fact the number of lines for the target segments compared to the source in the Workbench TMX I exported for upgrade seems to be pretty consistently expanded like this.  So I guess only the really long ones have exceeded the number of tags Studio can handle in a single segment.  This one had over 1800 tags in one segment so I don’t really expect to see this too often!  I am wondering how Studio will handle this if I do though!

I put this to the back of my mind as my Project arrives.  It’s an update to a document I translated last year so I know I can expect some good “leverage” from this.  What do I mean by this?  Well, I mean that many of the segments should be providing me with 100% matches from my Translation Memory because I’ve done this text before.  So good “leverage” is 100%, bad “leverage” for me is going to be less than 85% for this text because my experience with this specialist material from the past, translating with Microsoft Word and Workbench, was that “leverage” less than 85% didn’t help me a lot and I preferred to use the concordance feature.

I start work, and then I notice something strange.  A segment I know that provides me with a 100% match in Workbench is giving me a 99% match in Studio 2014.  In the screenshot below, the top pane is my segment in the translation editor, and the bottom pane is showing the Translation Memory results: 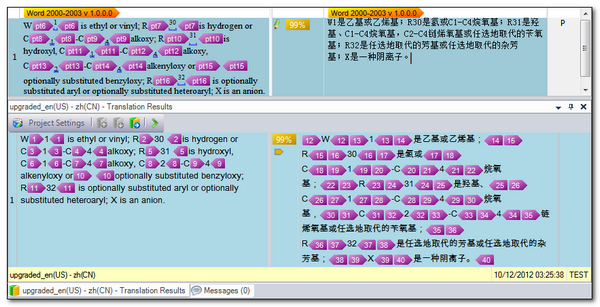 The reason for this 99% match appears to be a missing formatting penalty but it seems to have the same number of tags in the source so I’m confused.  But the other confusing things about this screenshot are that the target segment has not got any tags in it at all, despite them being shown in the Translation Memory results window; and since I am displaying the tags in TagID mode I can also see that the numbering is different and the source and target tags in the Translation memory do not have matching number sequences; and there are significantly more tags in the target than in the source.  So quite a few things appear to be wrong here.

Out of interest I test this in TagEditor, and here things are even worse as I get no match at all even with my settings reduced to 30%.  The problem here is that TagEditor finds more tags in the source than are in the Workbench Translation Memory… and of course this is one reason TagEditor was unpopular for users migrating from Microsoft Word when  it was first launched:

But at least Studio does a better job of providing leverage with the upgraded Translation Memory, but it’s still not good enough for me as I want and expect 100% matches for work I have done before!  If I translate this sentence in TagEditor and confirm it to the Translation memory, and then upgrade this Translation Memory then the match in Studio is 100%.  But this doesn’t help me at all because I need to get from Microsoft Word to Studio.  It’s all very confusing!

Why is this happening?

But then I realise this is just one example and once I’ve got to here with my regular expression, upgrade the TMX and it looks fine, I realise this doesn’t work for another more complex scenario.  It’s also incredibly tedious and not for anyone who doesn’t like playing around with this stuff.

Fortunately help is at hand in the shape of the TM Optimizer which is a free application written by a far more capable developer than I am a regex creator!  All I needed to do was start the application, select my TMX, and run it.  A short while later I see this:

Wow… 731,546 unnecessary tags removed.  That’s nearly a million superfluous tags created by the Microsoft Word and Workbench combination.  Furthermore an additional 205 thousand tags were updated to make sure they had the appropriate matching TagIDs.  I think I would have been there a while playing with regex buddy!  If I open my file in Studio using this “Optimised” Translation memory I see this:

If you have already upgraded your old legacy Translation Memories (the ones created with Microsoft Word and Workbench as this was not a problem if you used TagEditor) then the good news is that as long as you still have the original TMX you can “optimise” your Studio Translation memory with this application too.

So a bit of a geeky post this week, but I thought it would be worth trying to explain what the problem is with upgrading these old Translation Memories because the question does come up from time to time. You can import your TMX as text only and this of course won’t have the unnecessary tags; but it will also be missing the necessary ones and you still won’t get the best leverage.  You can also use Olifant and remove only internal tags, but even here it’s not selective enough to do the job that the TM Optimizer is capable of.

I hope that was a useful post as I’m having second thoughts about posting it as I come to the end, mainly because it’s such a geeky topic.  But hopefully the easy solution will be of interest for anyone who has encountered this problem when expecting better leverage from their upgraded legacy Translation memories.

13 thoughts on “Upgrading your leverage”