If you regularly read the articles I write you may have noticed that I like to talk about the SDL OpenExchange (now RWS AppStore) a lot.  I write articles about some of the cool applications that are available to users of the SDL Language Platform (Studio, MultiTerm, GroupShare, Passolo etc.)  I see this platform in a similar way (albeit a smaller scale) to an I-Phone or an Android phone… the core features are already there in the products and the APIs support the ability for any developer to create more features and capabilities to do anything they like!  Things that might only be useful for a small group of users, or they might be interesting for many… or they might support the breaking of long standing traditions!

I said they can develop anything they like, but this isn’t strictly true.  There are parts of the applications we haven’t made available to developers yet so we have an ongoing plan to improve this in the future.  In fact this article is about two new APIs that are available as part of the Studio 2015 SR2 due for release this week, and they are both whoppers in terms of what this means to developers and external terminology providers.  But first let’s recap what we have today:

Already pretty good and you can find them all here, but we have plans for a lot more this year alone, the first of which I’m going to share with you now… and don’t think just because you’re not a developer this won’t be interesting for you… it will!

This provides long awaited functionality that enables a developer to add their own tasks to the Batch Task feature in Studio.  The new Studio 2015 SR2 release even uses this capability to create a WIP (Work in Progress) report that can tell you how much work is left at anytime during the project.  It even distinguishes between Translation and Post-Editing which is nice so you have an idea how much of the work is editing Machine Translation for example.  You’ll find this built into Studio when you upgrade.

Our OpenExchange team created a little application to help developers see how to use this API.  So they not only created the application which you can download from the OpenExchange and make use of, but they also provided the source code in the Community Github site.  The essence of this app is that it adds a new Batch Task to replicate a capability that never made it from the MS Office Converter app and into the Export for External Review feature.  The ability to export your files in an Excel format.  This was a feature of SDLX and is quite useful because you can add comments to as many columns as you like in Excel for review, and you can easily sort and filter the file using the excellent builtin features of Excel.  You can’t import the file back in again, but apparently for some content the ability to review it in Excel is more important.

Simple to use, you just select a Project, or specific files in the Files View, and then run the Batch Task 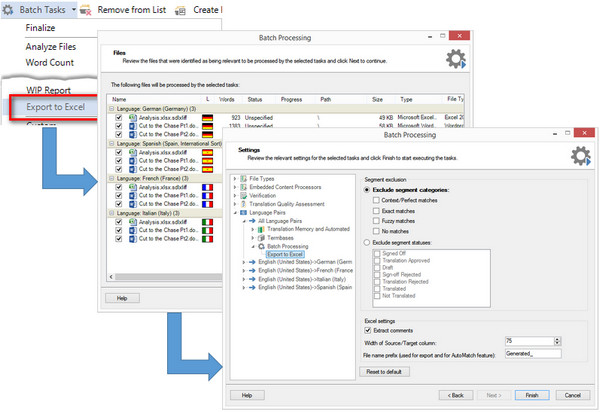 It’s not too clear in this overview but it’s a simple sequence of events where you do the following:

So very simple, but very neat I think.  Also a great example for a developer to take and see how this was accomplished so they can create their own Batch Tasks for the specific work, automation, they wish to carry out.

This one we’ve decided to dedicate to the previous product manager for MultiTerm.  Primarily because we have broken a famous Trados tradition with the sample application… we’ve made it possible to add an Excel spreadsheet to your project and use it as a glossary without any conversion or importing required!  It is a fairly basic implementation, it only allows source and target terms, synonyms, and forbidden terms… but it also allowed us to test a glossary with over one million entries (even more terms) and it works really well.  It’s not going to be a good replacement for a tool like MultiTerm but if you only work with simple glossaries and don’t wish to work through converting to MultiTerm (even though it’s a doddle with the Glossary Converter) then this is a brilliant solution.  Editing a simple glossary like this will always be simple using the features of Excel, and then you just plug and play!

Developers can find the source code  in the Community Github site and anyone who might be interested to use it can find it in the OpenExchange here.  I think this API is going to be a game changer in many ways because there are so many 3rd party terminology providers and dictionary providers out there who could take advantage of this and create a plugin that allows translators to use their products interactively and in a fully integrated manner… so I’m looking forward to watching this space!  Notwithstanding that it’s basic terminology in a spreadsheet!

Now, how does it work?  There’s a new way to select Terminology Providers very similar to the way we select a Translation Memory:

So a developer can now create a Terminology Provider that can be added to this list and made available to work in a similar way with regard to term recognition etc. as MultiTerm does now.

But that’s all I’m going to tell you about this application for now… I think this is such an important feature that the use of a spreadsheet as an interactive Glossary while translating deserves an article of its own… so I’m going to write one to coincide with the release of Studio 2015 SR2.  Suffice to say, you can add/delete terms, use it for autosuggest and term recognition and couple of other new things that you can’t even do with MultiTerm!

For now, the message is that the SDL Language Platform is continuing to grow and in my opinion is becoming beyond doubt one of the most attractive platforms to invest into if you wish to build your business around its capabilities, integrate with your own systems, customise around your own workflows and enhance it’s functionality as you see fit.

So even if you’re not a developer, if you have an idea of how these APIs could benefit you then share it… share it with your employer, your colleagues, or even go find a developer to implement something just for you!  If you ever wanted your tools to do more to suit the way you work now’s your chance to see it happen!  And expect a lot more this year!!