Handling number only segments is a question that comes up a fair bit, and for a number of reasons.  Mostly it’s the more simple question of how to handle them at all; sometimes they are recognised and Studio can auto-localize them; sometimes they aren’t recognised and you need to work around this a little.  This question I’ve addressed a few times, so here’s a few links as a reminder.

A question that comes up less often, but still requires a little thought with regard to how to handle it is how do you determine the count?  What I mean by this is if you, as a Project Manager for example, are preparing files for a translator and wish to exclude the number only segments from the analysis because you have handled them first then how do you do this?  We know from this article, “So how many words do you think it is?”, that Studio separates tags and placeables in the analysis… but we also know that placeables consist of numbers, dates and other variables.  So doing the maths from the analysis alone is not enough.  We also know that if the numbers were not actually recognised as numbers by Studio then they will be mixed into the word count anyway.  Tricky?  Certainly it was worth a little investigation…
So, here’s a suggested workaround based on the premise that you have prepared the Project and had already analysed it.  I’ve used an empty TM for this example and get this analysis… it doesn’t have to be empty but it’s easier to see what’s happening like this: 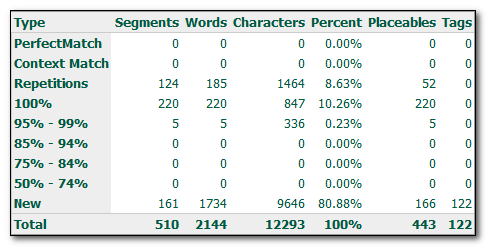 I used an empty TM in this example so that the analysis would show all the things that Studio considers an auto-localizable through recognition.  You can see we have 220 100% matches.  In the document a quick inspection reveals it contains these sort of numbers:
1
160
5.61
2,000
3.64%
So you’d think that perhaps this also means 220 numbers?  Maybe not… so first of all I want to select all the segments that do not have number only segments in them and lock them.  The easiest way to do this is first filter on something that won’t match any of the numbers above using a regular expression.  I covered how to do this in the articles mentioned above but as a quick reminder you can use something like this that will find anything that has letters in it, uppercase or lowercase:

I can then lock these segments and filter on unlocked segments to see what’s left.  If there is more left then either manually lock the odd one or two, or run another search to find the stragglers.  Once you have only the numbers left, and I was lucky in my example as the first expression got them all, you can either allow Studio to auto-localize them if appropriate, or copy source to target and search and replace as needed (for a file with a lot of numbers search and replace may be faster).  I would then select them all and change the segment status to “Confirmed” so they don’t get changed in error.
Now the fun part.  You need to download if you haven’t already, the SDLXLIFF to Legacy Converter, and use this to convert all your files to TTX.  But when you do this you use the option that excludes locked segments: 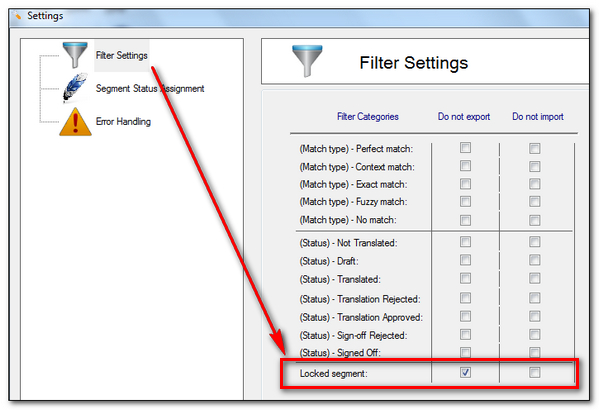 Now run the application and save all the files that are exported as TTX: 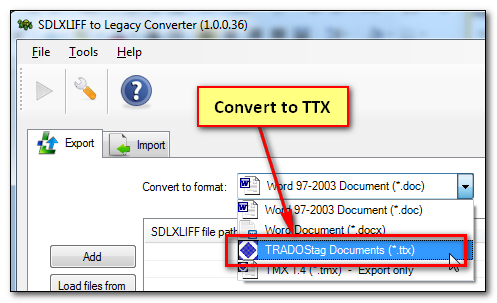 The file you will now have is a TTX that matches the segmentation of the Studio SDLXLIFF but contains only the number only segments.  So now you only need to know how many segments there are and you’ll know how many numbers there are.  How do you do that?  The quickest way is to read the log-file generated by the converter:

But you could also add the TTX file to your project in Studio and read the quick analysis here underneath the file:

So going back the original analysis where we see 443 placeables it looks as though I can remove 265 numbers from this count so that my analysis for the translator would be based on something like this… and I do have to guess a little at where they are in the analysis if I do this: 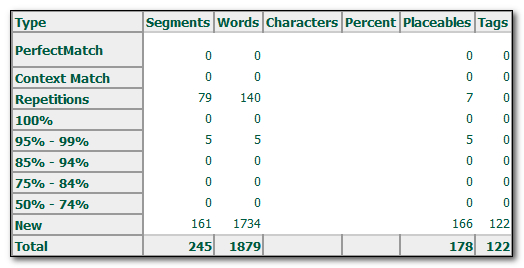 In my example the guessing was simple because each number only segment was handled as a single placeable and hence a single word, but it could be more complex.  So I took this idea a little further and this time created a new TTX by locking all the numbers and exporting all the non number only segments… I used this expression (to suit my document):

I then added this TTX back into my project and analysed both TTX files together… the theory being that they would add up to the original file… and they did: 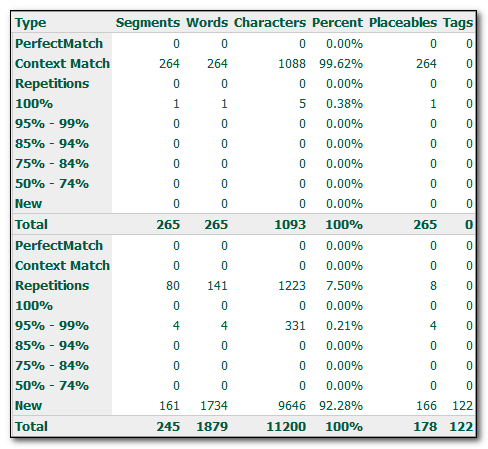 The top analysis is the TTX containing the number only segments, and the bottom one is the TTX containing only the text for the translator.  This verifies that each number only segment is a single word in this case, but if not then you’d have the information here to make the necessary adjustment.  The summaries are exactly the same, but you can see a few small differences in the details that are probably related to the analysis of a TTX instead of a PDF (yes I actually used a PDF report that I found on the internet because it had lot’s of numbers in it, and the results were actually good… despite me not recommending PDF as the way to go most of the time).
But in general, I think if you are interested in the total wordcount so you can agree a sensible mechanism for paying the translator after you have locked down all the numbers in the original SDLXLIFF then it’s possible.  I think a quick and simple reminder of the process would be good at this point, so this is what I did (a picture paints a thousand words): 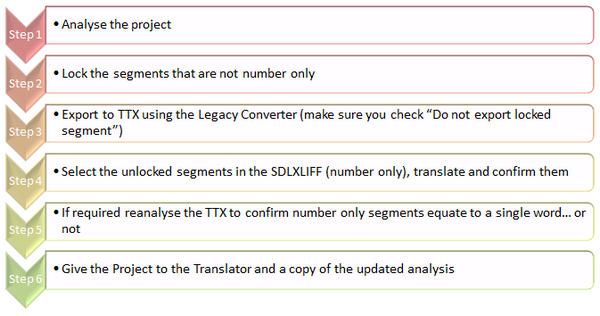 Hope you found that useful… or at least interesting.  I always find trying to answer these kinds of questions adds to my understanding of how Studio works… and sometimes helps to find useful ways of improving the product in the future… at least I hope it does.

0 thoughts on “Identifying numbers in your analysis”