Update January 2015 : Note that this is possible in Studio 2014, but now you can also merge after the project is created too!
The use of the term “glue” in describing what “Trados Glue” was used for made it very clear what it was intended to do.  In fact the term “glue” for merging files together is almost a standard!  I have no idea whether it was Trados that first coined the term in the context of CAT tools but it certainly stuck 😉
Today I see the question of how to “glue” files together to make it easier to manage them quite often… sometimes accompanied by the phrase “Trados Glue”.  So it seems appropriate to provide a quick article on how this is achieved with today’s CAT, SDL Trados Studio.  Studio has had a similar feature since it was launched back in 2009 but it is not called “Studio Glue”, although perhaps it should have been, it is simply called “Merge Files”.  It is also a big improvement over the original Trados version allowing you to merge any filetypes you like and work on them as a single file.
To to this, in the current version of Studio, you have to make the decision to merge the files before creating the Project.  The only exception to this at the moment is when you receive a package from SDL WorldServer as you are prompted when you open the package that the files are not merged and are given an opportunity to merge them.  But once the Project is created that’s it.
Once you have made the decision that you want the files to be merged and you reach the point of adding them to your Project using the Project Wizard you will see something like this:

So I have added five files to my Project, all different filetypes, and as you can see the “Merge Files” command is greyed out.  This remains greyed out until you select the files you wish to be merged.  You can select them all and merge them into a single SDLXLIFF (Studio bilingual file) or you can select groups of them as you see fit and create several merged files to work on.  I guess the biggest criteria in how you do this would be the size of the files as you don’t want to try and work with a single file that has hundreds of thousands of segments if you can help it.
For my example I’m going to select them all and merge them into a single file. 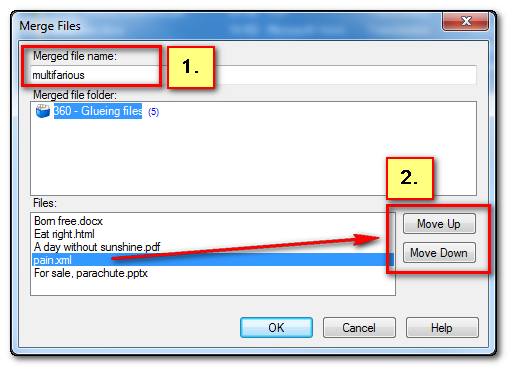 On completing the Project and opening the file for translation I now have all the files in one view:

In the Editing window (1.) you can see each file (only small to allow me to illustrate the point) where the name of the file is written in the orange coloured tabs that indicate the start and finish of each file.  In the navigation window (2.) you can select the files you wish to work on and quickly get to the start of each one… and in the case of the powerpoint file this expands even further to allow you to navigate by slide.
But that’s not all, even though I think this is already an improvement over “Trados Glue”, because you can also preview these files based on the capability for preview of each filetype.  I haven’t put a screenshot here as it’s hard to show a realtime preview in a screenshot… but a video will do it 😉

Finally, once the translation is complete and you save the target files they will be created as separate files in their original format for returning to your client.  You cannot save one file by itself, so it’s all the files in the merged file or nothing.  If you use Shift F12, or File -> Save Target As then you are prompted for the files one at a time.  So if the one you want is at the top then you could go through them until you reach that one and then cancel the rest… but in reality I doubt this is much of a help.  Otherwise you can use the “Generate Target Translations” batch task which will take care of all of this for you without prompting for each one individually.  A quick tip from Emma, a good one too, is that when you “Finalize” a Project, or “Generate Target Translations“, the SDLXLIFF will disappear from the files view and you are left with the separate files… nothing to worry about.  You just need to either use “Revert to SDLXLIFF” or double click a file to get the SDLXLIFF back… so like this: 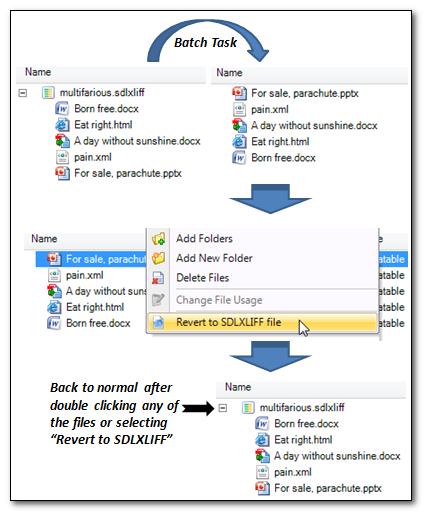 Simple!
If you watched the video and want to know where the article on creating stylesheets for XML is… Translate with style…

0 thoughts on “Glueing your files…”