The basic concept behind getting a quick and simple analysis report before you take on a job is that you create a Project that you only use for analysis and then you leave this permanently in the Projects View:

Once you’ve done this the process becomes quite simple.  All you have to do is activate the Project by double clicking it whenever you want to analyse a file, or files, then drag and drop them onto the Files View.  If you prefer you can also use the Add Files button from the File Actions group in the ribbon or Right-Click from the Files View window: 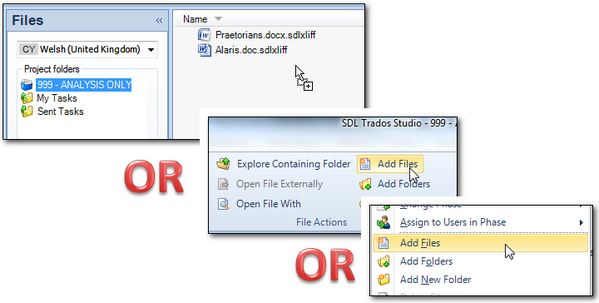 The one difference between these methods is that if you select Add Files in either of the latter methods they will always be treated as translatable files as long as they are recognised filetypes.  If you drag and drop without changing to the source language first then you will be presented with an option:

If you change to the source language then you won’t get this option and they will be added as translatable files.  If you decide you want to change the purpose of a file after adding it then you can change this by selecting the files and then clicking on this icon in the ribbon: 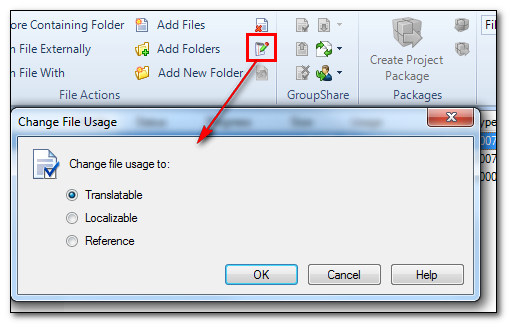 In this example I’m just adding three files, and once they are in the list you can right click on a file (or folder), or select several files together using the ctrl key and choose the Analyze Only batch task, or select it from the Batch Task icon on the ribbon: 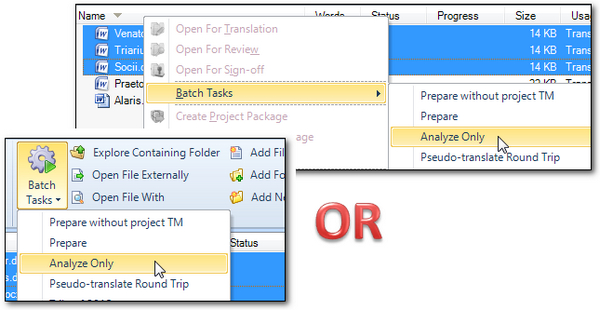 Once the task has completed you can select the Reports View and the reports at the top of the list will be the reports for this analysis. Note that the default Analyze Only task also produces a Translation Count report; if you have the Professional Edition you can create a custom task that only runs the analysis report: 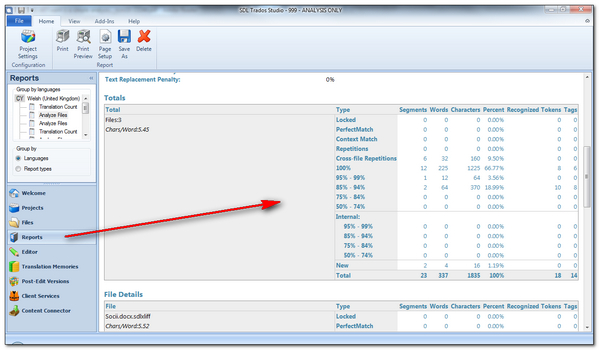 You can set the Project up to run without a Translation memory at all, or you can set as many Analysis projects up as you need all preconfigured with your usual Translation Memories and then the time it takes to run the analysis is as fast, if not faster than it was using Workbench or SDLX.  A bigger advantage of Studio is that if you work with one source language and multiple target languages then you can analyse all the languages at the same time which is something you couldn’t do easily before and of course you can also use as many Translation Memories as you like… something else you could not do in Trados 2007.

A quick note on carrying out the analysis without a Translation Memory. “Why would I do this at all?” you may ask.  Many SDLX users made use of a feature that reported the internal repetitions.  This feature allowed you to report on what benefits you would receive from translating based on the contents of the document you are working on rather than the Translation Memory.  This allows a more realistic report on the effort required to translate and you can achieve this without a Translation Memory at all.  In Studio we have an option called Report internal fuzzy match leverage which does the same thing and this can be activated under Batch Processing -> Analyze Files.  The help guide in Studio covers this feature quite nicely, and of course you can still run with this option when using one or more Translation Memories as you see fit.  In addition you can also lock segments that you don’t want to see included in the report and these can be reported as a separate item.  This is found in the same location as the internal fuzzy match leverage: 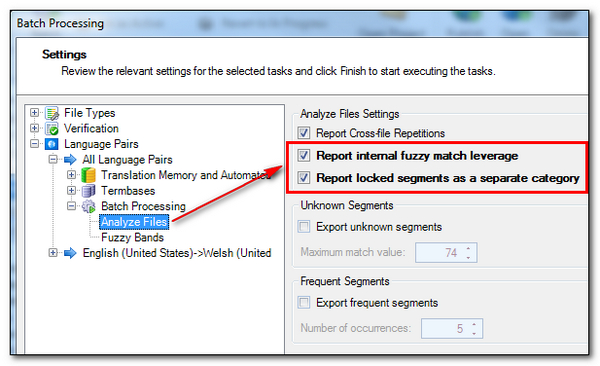 I thought it would be handy to see the complete analysis process in one go in a video because it often takes longer to read an explanation of how to use things than it does to watch it, especially when I try to explain the various things you might come across as you go.  Certainly I think this will show the process is pretty simple and certainly doesn’t take as long as you might think!

Finally, I just want to mention the OpenExchange. There are a number of applications available now that can use the analysis in Studio to make it easier for you to prepare reports for your customer, and there are a few that can be used to create an analysis without using Studio at all… and I’m sure there will be more as time goes by.  Here’s a few examples that have been written to use the analysis in some way.  I have linked to the OpenExchange pages and used the descriptions in these pages below:

The tool works by comparing two versions of the same SDLXLIFF file (before and after changes were applied); the files with changes are highlighted and all modifications are included in a comparison report.

The comparison report is formatted in a way that simplifies the understanding of what changes were applied from one version of the file to the other, along with a full break down of the modifications and related cost analysis.

goAnalyze: goAnalyze is a Trados 2009/2011 add-on which allows you to perform an analysis of several or even zipped files without having to open them in Trados Studio.
Before running the first analysis, you create profiles in the user interface of goAnalyze. These profiles consist of the language combination, the translation memories to be used plus optional analysis settings and even costing figures.

So keep an eye on the OpenExchange because you never know who will create a tool to simplify the analysis further or use it in some clever way for added value.  I don’t think it’s difficult to use Studio for this, and I hope this article clarifies it, but there’s always room for more innovation!

44 thoughts on “All I want is a simple analysis!”