Over the last year or so I’ve been asked by quite a few translators whether SDL Trados Studio supported using Antidote as a spelling and grammar tool.  To be honest I’d never even heard of them but duly looked them up and discovered that this great sounding name for a correction tool was a plugin for Word and various other applications aimed mainly at French speakers, although they do offer a “Module Anglais”.  They also have an API, but it’s not made public on their website… so this is where our fun starts!

First I had to ask a French speaking person in our office to speak with them (thanks Emilie) as they were not responding to my English, or machine translated emails.  This worked and they sent me an email in French with a link to the API documentation.  This documentation and even the methods in the code were in French… so the first order of the day was to translate them to English (the documentation, not the methods!).  We used SDL language Cloud for this and it did a pretty good job of making this understandable so we were able to make a start!  We then asked for a developer license so we could work on this… but discovered (in French of course) that this would not be possible and we had to purchase a full license.  All our protesting that it was surely in their interests to help us with this as we weren’t even going to use the application ourselves was in vain.  All we wanted to do was work on the integration and then support it… something that I think might support them selling more licenses.  C’est la vie!  Sometimes it’s really hard to support our customers… so of course we bought a licence!

In the end it took a couple of weeks, in-between other things, and we had a Beta plugin.  Then some good feedback from Émile in the SDL Montreal Office and also Julien from Azerty Traductions in France and this helped us shape the app for a good Studio experience.  Thank you to Angela as well for confirming it’s not going to work in Antidote version 8, so you will need version 9 at least.  To make the app work really well in Studio needed the developer, Romulus, to come up with some innovative solutions to improve the workflow and the user experience.  As he always does, Romulus has made the source code for his work available for other developers and this can be found here.  I think it’s going to prove to be a blessing for any developer looking to integrate a product like this that prefers to use it’s own well developed and ergonomic interface whilst still managing to feel as though it’s a part of Studio so the workflow is uninterrupted.

If you’re familiar with the product from using it in Word you’ll know Antidote works by adding an Antidote group to the Word ribbon.  The integration into Studio follows the same approach, although we also added a right-click context menu and the keyboard shortcuts.  You’ll find the ribbon group in the Review Tab when you have files open for editing, and you’ll find the context menus by right-clicking when editing.  They might not be all together like this… depends on how many app store plugins you have installed, but they are all there:

The keyboard shortcuts have no default values so you’ll have to set them if you want them.  I used Ctrl+D for the Corrector and made sure there were no duplications… if you find the shortcut doesn’t work double check your shortcuts by sorting on shortcut in the options.  The Antidote shortcuts are in the Sdl.Community.AntidoteVerifier group and there are three actions:

After that it’s just like using it in Word… except you’re in Studio!  Some nice features to note:

While I was playing with this tool I found the best way to handle this, if you only have one screen, is to minimise the navigation pane in Studio and run the applications together like this… it’s hard to read but if you already have Antidote I think this will just help you to see how it may look with Studio side by side.  It’s a better experience with two screens of course: 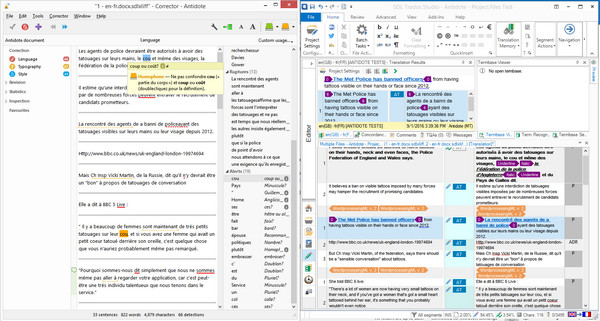 If you don’t have Antidote and are still wondering what this is all about then maybe take a trial version from their website and see whether it’s a useful tool for you.

An important point to note regarding previous versions.  The API is apparently unchanged from version 8 to version 9, and we are assured by Antidotes “Service à la clientèle” that the API is fully compatible with version 8.  However, the only person who was not able to get this to work during our Beta testing was using version 8.  So we have our doubts!  Version 9 works really nicely.

Where can I get it?

You can find the SDL Trados Studio plugin for Antidote on the SDL AppStore here.  It’s freely available for anyone with a license for Studio 2015 or 2017 (when available) and of course you will need a licensed copy of Antidote too (at least version 9).

0 thoughts on “The spelling & grammar antidote!”