Emma Goldsmith wrote “SDL Trados Studio TM isn’t updating! My translation memory is empty!” in 2013 and it’s a very useful article helping users to answer the question about why their translation memories won’t update.  But there’s another one I have come across a few times recently and it’s all related to these pesky variants!  Let’s say you start using Studio and you have been working on projects using the “translate single document” approach for de(DE) into en(US), so you also have a translation memory with these variants.  Then one day you’re asked to translate into en(UK), so you create your project using de(DE) -> en(UK) thinking you’ll add the translation memory later since it didn’t appear in the way it usually does, only to discover you can’t use the translation memory you have because the language variants are different.  Fortunately someone tells you about AnyTM and you add your TM to the project anyway and all is well!

All is well until you are sent ten files and you decide to create a standard Studio project for this.  You haven’t done this before but as you work through the settings all seems well and you don’t notice that you have two target languages in the project wizard:

Even if you did notice the two languages you might not realise the implications since the one you want is there, English (United States).  You don’t even notice something could be wrong after adding your files since you see your translation memory all set up and ready to go:

You carry on working through the wizard and open the first file to work on it by double clicking on the first one in the list, you translate the file and as you work through it you notice that your TM is not being updated and you see this message in the translation results window:

You check your Project Settings and the translation memory is there and checked to update.  What’s going on?  You google the problem and review Emma’s blog… still can’t sort it, so you post into the RWS Community and nobody can help you there either!  So let’s examine the facts.

ok… all understood so far but why does Studio show the translation memory in the Project Settings if it’s not there?  The reason is explained by the way the Language Pairs are organised in your settings:

The way Studio works is that it provides a way to apply settings and translation memories for all the languages in a multilingual project by adding them to “All Language Pairs“.  This is very handy and can save a lot of work on projects with 30 or 40 target languages.  You can also specify different settings for any one or all of the target languages by checking this box for the languages in question, in this case de(DE) -> en(UK):

If, after checking that box, I now go back to my “All Language Pairs” I would see that I am also told that the de(DE) -> en(UK) language pair is now using a different Translation Provider, followed up by the very helpful message that there are “No translation providers” because I only have a translation memory added for de(DE) -> en(US).  There are no memories available for an en(UK) target language because I have never added one.  If I applied this checkbox to the en(US) target language as well then I’d see this: 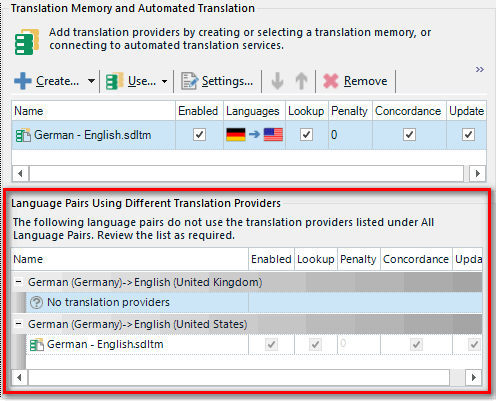 Now it starts to make sense because I can clearly see I don’t have a translation memory for one of the language pairs and it’s clear which one it is.  But unless I was always using the specific language pair settings it’s easy to miss until you understand what’s happening behind the scenes.  In fact unless you worked with multilingual projects on purpose you could be forgiven for not noticing this at all.

So, now we’ve hopefully cleared that up what are the options?  You have a few:

So not a huge problem with a few ways to resolve it.  But I think worth noting how this happens and ensure you pay attention to the number of target languages to avoid something like this happening in the future.

Around five years ago I created a video showing how to merge translation memories which works really nicely and shows the power of SDL Trados Studio for things like like this.  But what it doesn’t handle for merging is variants.  If I have three en(US) -> de(DE) translation memories and one en(UK) -> de(AT) translation memory then the best this feature can offer when I try to merge based on language pair is this: 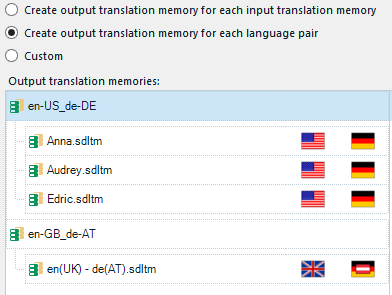 Two translation memories instead of four because it can’t ignore the variants in the same way an import can.  So if you find yourself in this situation and wish to create a single English to German TM that you intend to use for all variants because you don’t worry about the differences, or you have some other way of identifying differences using Fields and Attributes for example, then the process would be this:

So this is also fairly straightforward to solve and it probably easier than editing the language codes in the TMX file.  If you do want to use field values to identify the variants and work with one TM then you need to export all of your TMs to TMX (after merging to reduce the number if you have a lot of them) and then create a new SDLTM containing the appropriate fields like this for example:

Then import your TMX files and choose the variant that is appropriate like this for example:

The same approach would then apply to your future translations… you would select the appropriate field values for your projects and stamp each translation unit accordingly.  If you don’t remember to do this religiously then the whole idea of using fields and attributes in this way becomes a nonsense… so think carefully before you decide to work this way:

My personal opinion is that this explanation of fields and attributes is more of a “what’s possible” than “what’s sensible” and if you wish to retain the ability to uniquely identify differences between variants then you should use multiple translation memories.  This is really simple and explained in this article.  What’s also interesting is that when I wrote that one there were apparently 16 variants of English, and here we are, over 5 years later and we have 94!  How did that happen!  More importantly, if you actually receive work with these variants and you use field values just imagine how complicated it could get!

The last thing I wanted to cover in relation to these pesky variants is spell checking. When you complete your translation and look for the spell check you are going to see one of these things and it doesn’t matter whether you are using Microsoft Word as your default spellchecker or Hunspell… you can still have this problem, although there is potentially better coverage with Hunspell:

It’s pretty annoying when you get the “not supported” message, but let’s look at why this is and I’ll use English as the target language for this illustration.  94 variants and Microsoft Word covers two of them, en(US and en(UK).  Now, having said that the Microsoft Word spell checker will kick in with more varieties… in fact these ones; Australia, Belize, Canada, Ireland, India, Jamaica, Malaysia, New Zealand, Philippines, Singapore, South Africa, United Kingdom and United States.  Why is this?  I have no idea but perhaps there’s a quick win in there somewhere once we find out!

For now we know you can spellcheck 13 English variants using Microsoft Word while Hunspell doesn’t fare so well out of the box as it only supports 7 variants… Caribbean, Australia, Canada, New Zealand, South Africa, United Kingdom and United States.  But Hunspell does have a significant advantage over Microsoft Word and that is… it’s a doddle to add new ones!  Here’s how it’s done.

There is a knowledgebase article here which explains how to do this, but since I’ve seen many people still struggling here’s a short video demonstrating how it’s done using English Europe, or en-150.

4 thoughts on “Too many language variants!”