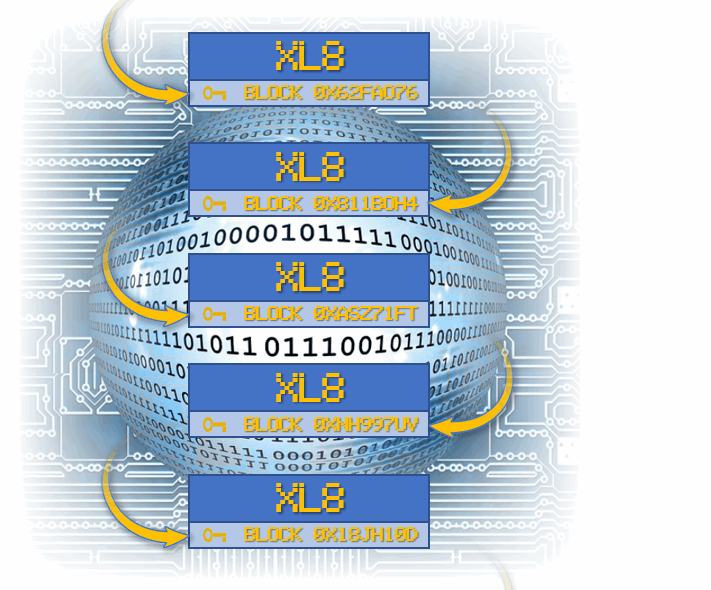 Data protection legislation such as GDPR are a little like sticking a plaster on the problem of data security and trust, and the implementation of their requirements has certainly left many with mixed feelings about the effectiveness of this kind of legislation as it’s still unclear in many areas how to deal with personal data.  I’m not saying it’s a bad thing, but it’s certainly not a long term solution to the problem.  Often it’s simply common sense that you’ll have to provide some personal data for the things you do and sometimes it’ll be useless if that data is not available publicly.  This is where blockchain comes into the equation as it offers an alternative way of managing data and automating trust without the need for large organisations and governments to act as gatekeeper, or for you to hand over your personal details again and again to every service that asks for it.  But what is blockchain exactly and how does it help solve the “security” and “trust” issues?

Don and Alex Tapscott wrote an excellent book called the Blockchain Revolution, well worth a read, and they define a blockchain like this:

It’s this idea of the blockchain that can be used to record anything of value that’s interesting for me.  Blockchain technology has been in the news a lot recently, mostly around the volatility of cryptocurrencies leading to a perception that blockchain is a bad thing.  I don’t think everyone sees it this way but the link many people make between blockchain and cryptocurrencies is often the wrong one.  For example, cryptocurrencies (like bitcoin, ethereum, ripple xrp etc.) and blockchain are not the same thing!  Bitcoin is a cryptocurrency that uses blockchain technology… but many other things can use blockchain technology and the underlying concept is simple and brilliant (you can read the original paper from Sakoshi Nakamoto that started this idea in 2008 here).  So as my mind wandered around the possibilities of this technology I wanted to think about how this could be used in the translation industry where blockchain is something I think we have only seen raise its head a few times… and so far (Langpie for example) hasn’t done anything to improve the perception of this technology in our industry.  First of all I thought it would be helpful to share what helped me to understand the concept of blockchain in a way that made it very easy understand.  So if you are not familiar with block chain (and if you’re interested) I recommend you take a few minutes to review this excellent video from Shai Rubin which I found to be the best no frills explanation of the core principles I’ve seen.

I mentioned that blockchain is not the same thing as cryptocurrency and this is a very important concept to understand because it relates to the idea of a decentralised ledger that can support a lot more than financial transactions alone.  The World Economic Forum has written a paper called “Building Block(chain)s for a Better Planet” which is well worth a read.  In the full report they discuss how blockchain could disrupt the way the world manages environmental resources and help to drive sustainable growth, identifying more than 65 use-cases where blockchain could be applied to these challenges.  They also provided a model, very similar to this one below from blockgeeks.com, which explains better than I could in one image how the block chain works: 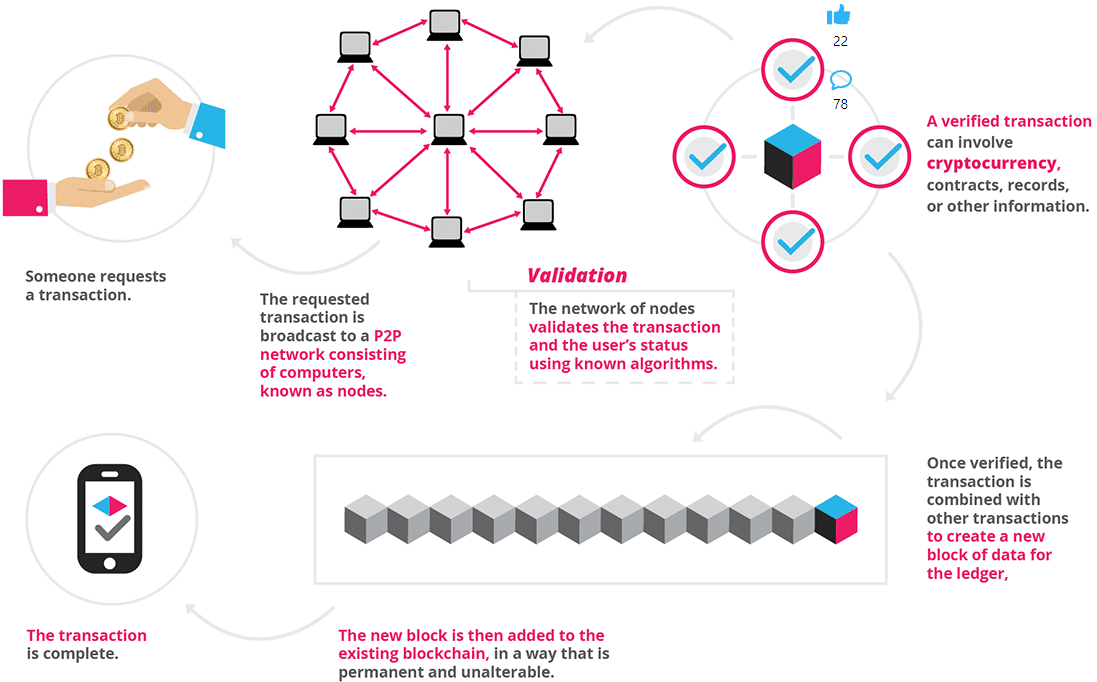 Image reproduced with permission from blockgeeks.com

Blockchain in the Translation Industry

Apart from Langpie which grabbed the headlines for all the wrong reasons, I haven’t seen much written in the translation press about the possibilities of blockchain, much less anyone taking it forward as a platform for the future.  Slator has written a few articles, some of which are very interesting and worth a read.  Gábor Ugray wrote an interesting piece in his blog jealous markup in January this year, rounded off with some tongue in cheek comments that belie the credibility of the possibilities he raised, and more recently Robert Etches seems to have taken the first major move into this space with his new venture Exfluency and the looming initial coin offerring in this space… XFL tokens.  All of this is interesting because we’re not just talking about Artificial Intelligence or Neural Machine Translation as the new big things, but instead we’re talking about how we can use blockchain technology to get the most from these exciting areas in the future in addition to radically changing the way we do business.  In fact we’re talking about how everyone from a freelance translator all the way to a global enterprise can benefit from the advances that some people worry will take away their work.  Blockchain promises exactly the opposite and teases us with the potential to reduce piracy, give proper value to qualified and experienced practitioners, add trust to improve business processes… in fact all the things people say about the benefits of blockchain.  I can see why Gábor finished his article in the way he did because it all sounds too good to be true with a lot of hype and technobabble building up the capability of this technology.  But with many hailing this as the most important revolution since the internet I think we’re on the edge of some exciting changes for the better in our online world.

I sat down a couple of weeks ago and drew up a mindmap, which I won’t share here, of some of the things I thought blockchain could help with in a decentralised ledger of translation related activity across a peer to peer network.  It was great fun thinking about it based on the limited experience I have in this space and the opportunity turned out to be a lot more than I first expected.  Here’s a high level dump of some of those things.

Cheap unqualified translation services would find it harder to compete… who would knowingly buy services in a specific field from practitioners without proven experience and qualifications?  These credentials would be validated on the blockchain allowing you to quickly find qualified translators, reviewers, post-editors to suit your needs.  The HR process for a company around recruitment for skilled people could be radically improved, no longer relying on a written CV and references from one or two previous employers.  The market for professional translation software could undergo a sea change with responsible companies able to ensure they didn’t promote the black market as they would only employ professional translators with licenced software validated through the blockchain involving software vendors.  Translators who worked regularly with one type of software could “lease” a licence for another type of software for a fee from fellow professionals when they were not using theirs – validated by the vendors and paid for through the blockchain.  Resource sharing, productivity and quality metrics could be extended across the entire industry by allowing practitioners to sell their own validated data through the blockchain to anyone who required it.  A question that comes up today with the increased use of APIs is where to find a suitably qualified developer – blockchain could support a validated register of qualified developers encouraging training and qualifications in more fields to meet a growing need.  Project Managers faced with the tricky task of extracting translatable text from complex XML files could find an experienced and qualified localization engineer – all validated through the blockchain.  Gábor mentioned regulated industries where the immutable nature of blockchain could perfectly fit the bill and do away with the current document based workflows that are fraught with technical difficulties.  Clients using web-based machine translation could improve the quality with an appropriately experienced translator validated through the blockchain.  The possibilities are certainly not finite.

I couldn’t write an article in my blog without mentioning APIs.  But these are really key to building a successful blockchain environment.  One of the fundamental ideas behind this technology is that it’s open and that it provides open APIs, and this means that we should be able to take many of our existing applications and integrate them with these new platforms as needed.  There’s an interesting article on this topic from Mark Yagalla where he tries to explain how the lack of developers with skills to help “businesses looking to benefit from the cryptographically secured immutable trustless automation that blockchain technology enables” is less of an issue as you might think.  So the provision of good APIs to encourage software developers in the translation space to start integrating blockchain solutions into their workflow is very important.  I’m looking forward to the next few years as we see what impact Exfluency has on the way we can do business in the future, and how quickly other companies follow suit.

Now I’m not saying blockchain is the answer to everything because it’s not.  There are many things that you can’t rely on a computer to provide as the “trust” in a transaction.  For example my wife always buys organic and one of the things I regularly discuss with her is how does she know that the organic sticker on the goods is valid?  She has to “trust” that the people preparing these goods in the first place really do have the right processes in place, and personal integrity, so that the goods in the organic section of the store really are organic and someone didn’t just place a sticker on the less attractive ones to help sell them.  Blockchain would add an automated “trust” factor to a process that is already open to abuse.  But there are plenty of things where blockchain can certainly improve the process we have today… not least the time it takes to transfer money through a bank, or the inexpicably high transfer fees for things that should be no more than a computer process requiring little overhead from the bank.  Blockchain promises to provide tools that would allow us to take responsibility for the use of our own data and to simplify business processes that are needlessly complex.  So I for one am excited about the prospects of blockchain technology in the future and in particular how it’s going to change the way we do business today.

What do you think?

0 thoughts on “The translation blockchain?”