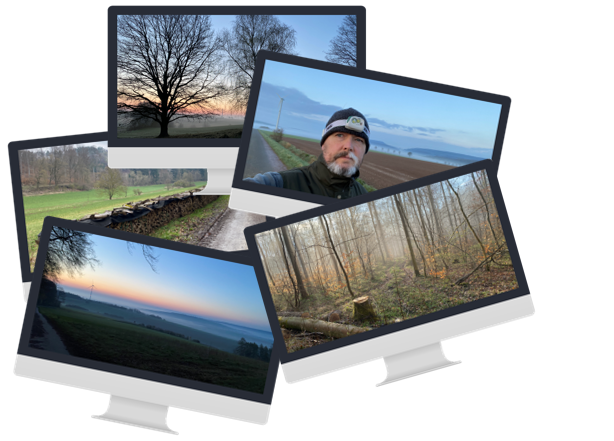 I started thinking about “A room with a view” by E. M Forster when I contemplated how to start this article.  But as you can see from the images on the left my mind wandered from this idea and was focused more on the “view”.  This is quite possibly because our R&D team started a “Working from home” distance challenge to cover as much distance as you can every day for a month by physically getting out of your office/home and taking some fresh air.  A great initiative in these days of working from home where it’s all too easy to never leave your desk!  Walking, running, cycling and even swimming were acceptable activities and you get the distance converted into points based on the type of exercise you are doing.  You do have to track the activity and you have to take a few pictures as evidence of your efforts… but that brings me back around to my topic for the article… the pictures, or more specifically the views.  Yes, this is a very tenuous link indeed with the actual topic which is studioViews!

A “view” in database terms is often the name given to the set of data that is returned when you run a query.  studioViews is basically the same thing… you make a query on your project files and the application can create views in the way you asked for them and then you can work on these views separately, eventually using them to update your project when ready. The main difference between studioViews and a view in a database is that Trados Studio doesn’t use a database, so studioViews is all file-based.

The views are particularly useful for these sorts of reasons:

The application itself can be found in the appstore here and you can also find a useful wiki in the RWS Community (yes… I haven’t mentioned this before in my blog but in case you didn’t know RWS acquired SDL at the end of last year!)

Before I get into a little detail, even though I don’t intend to delve into each option as the wiki is very explanatory, I should mention three important reasons for creating this app:

Despite this, SDLXLIFF Split and Merge actually has over 13k downloads and it’s a very popular application.  So for me studioViews is a very significant development and I wouldn’t be surprised if it’s another application created by the brilliant appstore team that eventually finds its way in the main product.

So, back to the features…

This is straightforward enough.  You select one or more of the files in your project in the Files View like this: 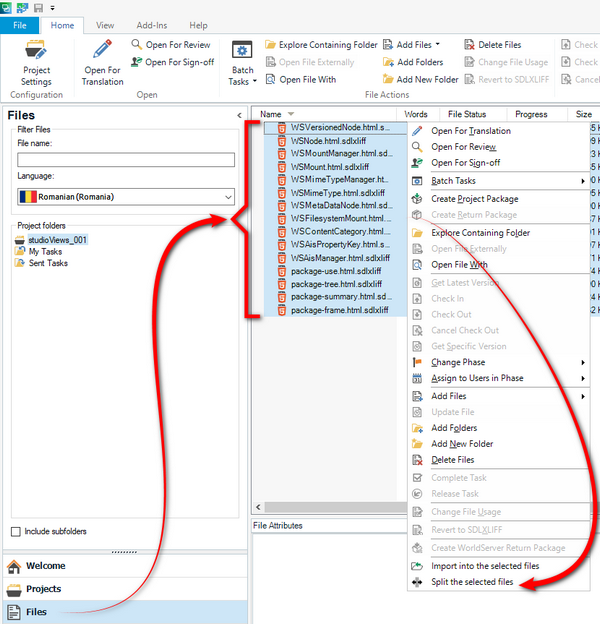 Then select the option in your right-click menu to “Split the selected files” which will bring up a window, that may look a little familiar if you’ve used SDLXLIFF Split and Merge before: 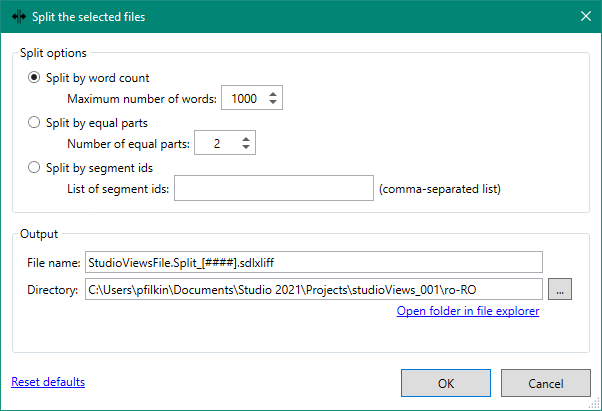 Yes… it’s almost exactly the same as SDLXLIFF Split and Merge, and deliberately so!  But there are a few differences… so let’s quickly discuss these options:

But by now I can hear you saying…SDLXLIFF Split and Merge also did this:

Yes… indeed it did!  BUT… and it’s a capital BUT… I have no idea what the “Check translation correspondence score (percent)” actually does and even when I asked around the users I know who regularly use this application at RWS, including the person responsible for the original development, nobody else seemed to know either!!  So, I told the studioViews developer to leave it out and we would address it if anyone ever came back and gave us a good reason for having it.  As for the wordcount… on the basis we have the excellent Reports Viewer Plus application now that is far more functional for reporting and extremely fast, we left this out as well.  So far nobody has complained!

Now… what about the merge back together?  Well, this is the really neat part of this application.  You don’t merge the files back together!  Instead you select the other option in the right-click menu to “Import into the selected files“.  This means you can do things like:

It’s a very robust application and far more suitable for working collaboratively or breaking down large files to work on by yourself.  But that’s not all!!

Splitting from the Editor…

One of the best features for manipulating files in the Trados Studio Editor is the Advanced Display Filter 2.0.  It’s 2.0 because Trados Studio 2021 actually uses what used to be the Community Advanced Display Filter created by the AppStore team which is why you won’t find this on the AppStore for the current version of Trados Studio anymore.  It’s excellent being able to filter on almost anything you like, but there wasn’t a very good way to save the data you filtered on as an SDLXLIFF.  There is a “Generate” feature that allows you to export the SDLXLIFF but it isn’t foolproof and there are things that will fail depending on how you have filtered and what type of files you had open in the Editor.  Fixing this is a major piece of work and the Advanced Display Filter isn’t an app anymore which means we can’t do anything quickly to improve it.  So instead we have added the improved functionality to the studioViews app.

You can enable this feature by clicking on studioViews in the View ribbon when you have your files open in the Editor, then position the window wherever you like.  I dropped it in with the Terminology windows as it doesn’t need much space and I can just bring it into play when I need it: 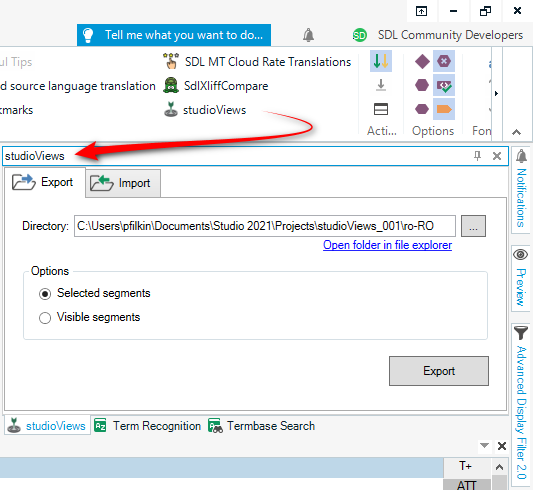 Full instructions in the wiki as before but essentially there are two tabs, “Export” and “Import”. The “Import” options are exactly the same as they are for the Files View so I won’t address these again, but the “Export” options are interesting.  Just two choices…

The “Selected segments” allows you to manually select any number of segments you like in the Editor and then export the selected segments as an SDLXLIFF to work on elsewhere.  Very cool, and if you’re struggling with a very complicated filter to get what you want you may be able to get close, and then select all segments, and just deselect the ones you didn’t want.  Very cool indeed!

The “Visible segments” option will export whatever you have filtered on.  So when you scroll down, whatever segments are visible after filtering will be used to create the SDLXLIFF and export to a location of your choice.

And that’s about it… very simple and short, but a lot of ingenuity has gone into developing this plugin and I’m pretty sure that once more users become aware of the capability it offers we’ll see the number of downloads for this one going up.  So if you haven’t already I recommend you take a look at the wiki and then download and install studioViews to have a play.  And a quick reminder that since this is for Trados Studio 2021 you can get this through the integrated AppStore, so no need to actually go and get it from the AppStore in a web browser.  Just open the AppStore in Studio and start typing studioViews into the search field: 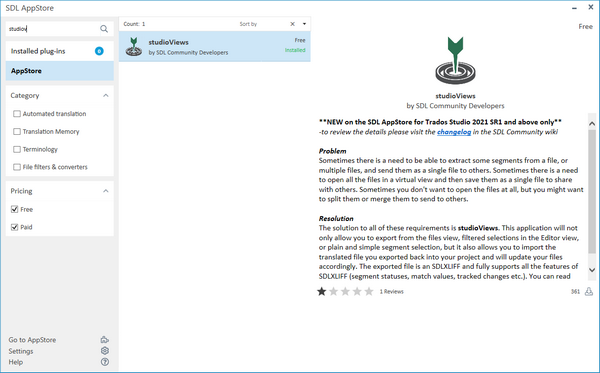 Then click on the “Install” button, restart Studio and you’re done!

And finally… back to the beginning, the “WFH Distance Challenge”.  It ended this week and I’m feeling quite satisfied with myself because whilst I didn’t do the most, I did exceed my target from day one which was 400 km… all walking.  So a great way to keep fit, and sane, and enjoy the views… which you can now do in, and out, of the office!