So now let’s flip the process on its head!
I’m not sure how often the need arises to create a Translation Memory from a Termbase but I can tell you that the article I wrote previously called “Creating a TM from a Termbase, or Glossary, in SDL Trados Studio” is the most popular article I have ever written… closely followed by an article on why wordcounts differ between tools called “So how many words do you think it is?“.  It’s an unfair competition because the latter was written some 4-months afterwards so needs more time to catch up… but there is no denying that the process of converting a Glossary to a Translation Memory is something people are interested in.
I then came across a post in ProZ this week from a user who wanted to do the reverse.  So convert a Translation Memory to a Glossary for use in MultiTerm.  There were a number of solutions offered… but here’s one I like using the SDL OpenExchange (now RWS AppStore).
First of all you take your Translation Memory, and we’re talking Studio here so it’s the SDLTM.  You then use the SDLTmConvert application to convert the SDLTM to a TXT file like this: 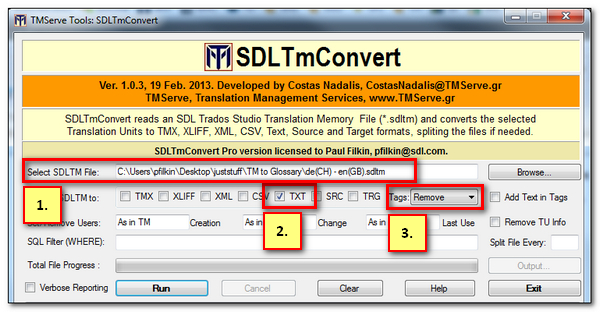 So I used these options;

I then click on Run and a TXT file is created in the same folder.  Next I start up the Glossary Converter and drag the TXT file onto the application window pane: 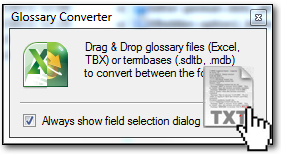 This brings up a window where you can select the languages you want to be used if the names are not recognised:

And that’s it, you’re done.  The termbase is created.  In my case it looks like this:

I’m sure some things won’t be suitable… so if you have long sentences in your TM I’m not sure I see how this will be helpful… unless you wanted to use this an an AutoSuggest TM!  But it would be pretty simple to go through and delete the longer segments… in fact you could do this in excel before you converted the TXT very easily.
It will be interesting for me to see if this reverse process is as popular as the creation of a Translation Memory from a Glossary… and of course it’s an interesting usecase that once again demonstrates the power of the SDL OpenExchange (now RWS AppStore) in providing features for all kinds of unusual usecases that would often require complex and tricky workarounds.

0 thoughts on “Glossary to TM… been there, done that…”