Today I decided to share a Freeware Application I came across whilst trying to find a neat resolution to a problem posed by a Translator using Studio.  I know many of you don’t like to use Freeware so I’m not saying anything about this tool other than I think it’s great, and if you’re happy to install it then I’m pleased to have passed on awareness of this tool to you.  I am not endorsing it in any way other than that!  If you have a policy not to install Freeware tools and still like the idea then I’m sure there are plenty of paid for applications that do a similar job.  This tool is called Advanced Renamer and is developed, and supported, by Kim Jenson.
The problem I wanted to solve is that the user receives several hundred files that make up a technical manual.  These files are not in alphabetical order, and they are not numbered, but they do come with a PDF that explains what the order is.  So the task for the translator, in order to tackle the manual in the most sensible way, is being able to merge the files together for translation in the appropriate order.
Now, it is possible to do this when you merge files for a Project in Studio as you prepare them but moving them up or down to suit before you merge them into a single SDLXLIFF: 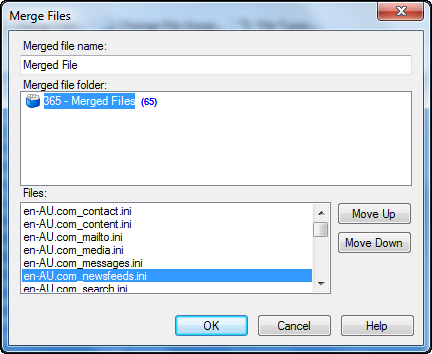 But the drawback of this method of course is that you either have one extremely large file, or you have to make a decision now which files you merge and then you stick with that choice for the project.  It would be far preferable to be able to decide what you want to merge and when… after the project has been created.  Of course this is now possible with Studio 2014 because you can select whichever files you like from the Project after it’s been created and merge them with the new “virtual merge” instead.  So you do this simply by selecting the files and then using the “Open for translation” button in the ribbon (or right-click and select the same): 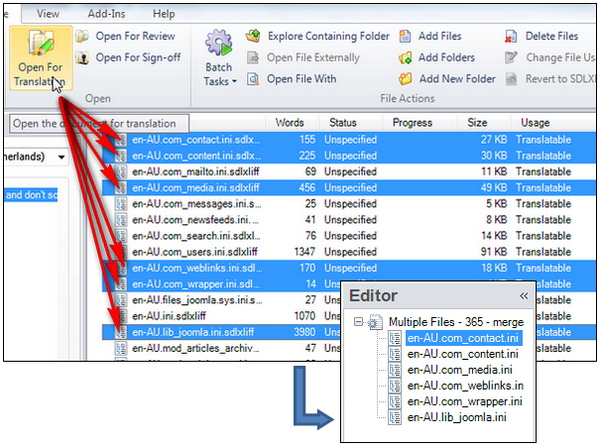 This is great… and a massive improvement over the 2009/2011 versions of Studio.  But it doesn’t get around the problem faced by our Translator who wants these files in order when they are merged.  So this is where the Advanced Renamer application comes into play.  This tool allows me to drop all the files into a window and then run a rule on it to add incremental numbers to the name of each file.  The application looks like this: 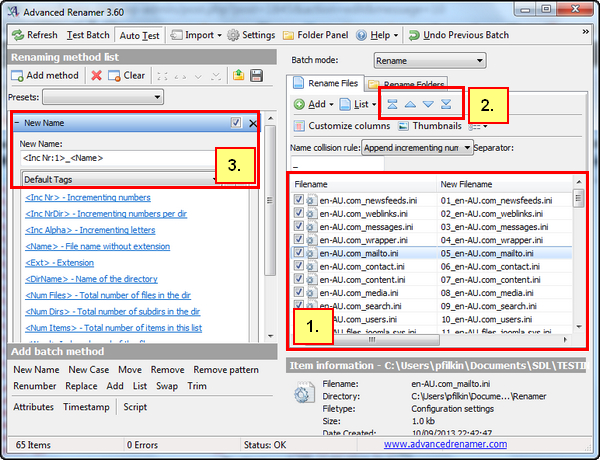 I drop the files into 1.  Then reorder them according to the instructions I was given in the PDF in 2.  Then  rename them using the method in 3. where the application can add a number to the start of each filename.  The change is also previewed in 1. in the “New Filename” column.  Once I have done this I can create my Studio Project with all the files in the order I wanted because Studio will sort them in number order, or alphabetically (upwards and downwards).
Brilliant… but of course you will now be asking how you get the filenames back since the client will probably want the files with the same names they started with.  This is also possible using those regular expressions we’re all getting good with now (see how useful they are!).

All I do is select a method that the application calls a “Remove pattern” and I can specify a regex to find the appended number and underscore… and remove them.  So my target translation files are now ready to be returned to the client with the same names they had in the first place.
The time it takes to sort the files will be the same in this application or anywhere else if they are not named in a helpful way to begin with… but the time taken to rename hundreds of files with this application is seconds and no need for a certificate of name change either!  Great application, and thanks Kim Jenson for writing it!

0 thoughts on “Advanced Renamer… and QuickMerge”