A strange title I know, but I thought I could indulge two of my favourite pastimes at the same time… first the SDL OpenExchange (now RWS AppStore), and the second customising stuff.
I may have mentioned the SDL OpenExchange (now RWS AppStore) from time to time in my articles… I do like the OpenExchange… because this is a unique feature of the SDL Language Technologies Platform that is probably underestimated by many users who think it’s only a few little apps that you can download to perform the odd useful function here and there.
In fact it’s much more than that and there is a complete SDK and set of APIs accompanying Studio and MultiTerm that allow a developer to create complex integrations with their business systems, write tools for enhancing internal workflows and process automation, develop custom filetypes to handle any kind of files at all, write verification plugins to handle not only unusual or special checks on the translation content but also the underlying format of the files themselves, reuse local or server based Translation Memory and Terminology resources by making them more accessible for anyone in an organisation etc… the opportunities for developers to do these things on their own without SDL having to do development work to enhance the tools with niche requirements is good for everyone.  I think this capability places SDL Language Technologies in a unique place.
But what does this mean to me, if I’m a professional translator working for myself?  Well, mostly it means I can access the OpenExchange where I can find applications written by developers who want to make them available for others.  This in itself is quite useful and everyone has their favourites.  But with Studio 2014 we’ve gone up a gear and have added the capability to the SDK for a developer to add their own menus and views in Studio that could be anything from adding new pages to the left hand navigation menus, to adding menu options that trigger processes not available out of the box, or creating additional ribbons containing functions that allow a translator to work they way they want.
So I still find myself asking what does this mean to me, when I’m not a developer?  Well the answer will probably become apparent once developers get their hands on the updated SDK and start to make use of these new features, but in the meantime there are a couple of little niceties that I (as a simple user) can play with now.  If I take a look at the current Beta version of my Welcome view in Studio 2014 I can see this… ribbon minimised of course: 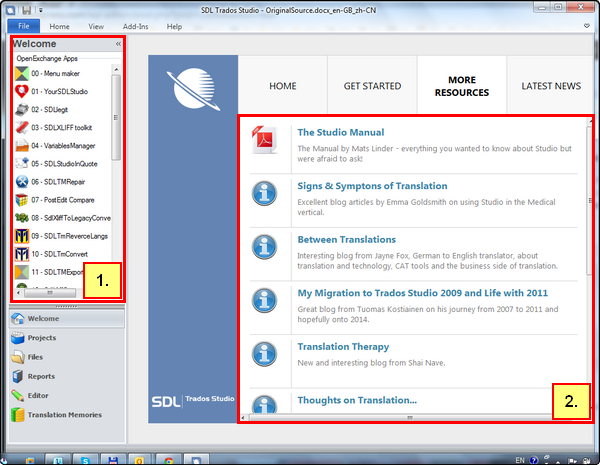 Looks a little different to all the empty space we used to see in 2011 with just the big buttons for starting work… and these options are still there under the Home tab (only looking nicer ;-))… but now we also have the More Resources tab (2.) and this can customised by you!
If you look at the left hand menu (1.) you will also see that my favourite OpenExchange applications can all be launched from here, and this can also be customised by you.
How did I do this?  Well if you look at the second application in the list in 1. you’ll see a little application called YourSDLStudio.  This is a very basic tool at the moment, but it will allow you to easily add and arrange the information in the More Resources tab in 2. to make this your own.  The OpenExchange applications you can see listed in 1. will be placed in this list through installation alone, so once the developers have upgraded their applications the installer should create the links to this location for you.  And if you look at the first application in the list you’ll see one called Menu maker which is a very useful little application developed by Tom Imhof of localix.biz which will allow you to easily add any program you like to this list, and rename the shortcut so you can easily sort them in any order you like.
You may also see a few more applications you don’t know in there too… but more on all of these later!
I fully expect that after SDL Trados Studio 2014 has been released we’ll start to see, in time, deeper customisations of the user interface adding more functionality and making Studio the tool you don’t want to be without!