In the unlikely event you’ve been visiting another planet over the last few weeks, you may not have noticed SDL are releasing Studio 2014 soon… how soon?… very soon, but no firm date to share yet before you ask!
This release has some long awaited “big” features such as a new alignment module to replace the WinAlign module developed in the olden days that you can review in a blog article from Daniel Brockmann.  It has some new functionality altogether for the regulated industry workflows around reviewing fully formatted Word documents, making changes and being able to update the translation in Studio automatically… a unique feature that will be useful for many users translating and reviewing with Word in this environment.  And of course we have some customer driven features such as being able to merge files in Studio at any time, and in any Project… rather than only at the Project creation stage.
But I’m going to talk about a few (not all!) of the little things that are also important for users of SDL Trados Studio.

New Options for Working with Comments

So things like being able to add your Studio comments when handling Word files into the target file so the reviewer can see what you meant.  If you remember, I wrote an article in July last year called “Did you know you can export Studio comments in your target Word file?” and then swiftly had to add a note in big red letters at the top when we released SP2 for Studio 2011 and disabled this functionality.  Well with Studio 2014 it’s back, and improved.  There were signs it may get better in 2011 as there were some greyed out functions in the filetype settings itching to be used… and now in 2014 it’s much improved and all working:

So you can not only save Studio comments as real Word comments in the target file but you also have the option to extract them when you open the file as translatable text or as comments from the author that you can read in Studio but not translate.  Very nice to have this little feature back and with the additional options.

I’m also going to mention a little question that comes up a lot, about how to omit number only segments, or some other type of segment from your analysis.  I’ve come up with some interesting workarounds in the past such as in this article “Identifying numbers in your analysis” where I used a neat open exchange application to convert the segments you wanted to analyse to TTX and then you could analyse that!  I was feeling pretty clever at the time, but it would obviously be better if you could do this without resorting to a workaround.  So the good news is that now you can because in Studio 2014 you can choose to omit locked segments from your analysis:

This gives you a new line on your analysis that looks like this so you can simply omit the locked in order to share the analysis on only those segments you were interested in:

This has lots of useful applications… if you are sharing a translation with a colleague you can analyse the two halfs separately, or you can separate out number only segments, or product codes that you won’t actually translate to give yourself a better idea of the time you need… and probably a host of other uses I can’t even think of!

Finally… because I’m only sharing three little things in Studio 2014… if you are an experienced Trados user from the past who upgraded to Studio, and especially if you were a Project Manager, then you may well have come across the problem of updating a Translation Memory with your own User ID .  The User ID is usually your Windows username and it was used in the olden days as a way to keep track of who translated the segments in your Translation Memory.  Studio users have either found a way to deal with this by using Fields and Attributes, or by hacking an export to send off to their customer in a TMX.  In Studio 2014 you will find an extra field to add a username for each user added to your setup (useful to help you remember them all if you deal with a lot of Translators):

So I can send out my Package for Translation, then, when I receive the return package and want to update my Translation Memory with TARA rather than my own UserID, I can use this new  button here: 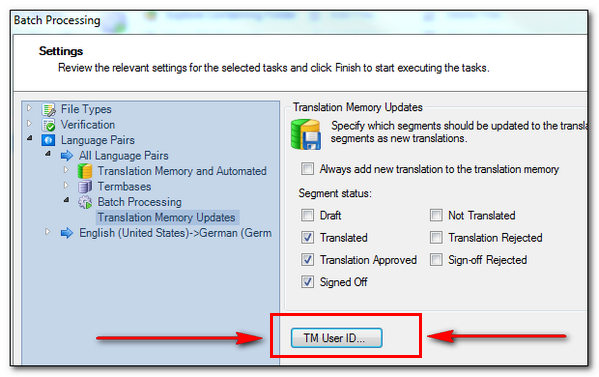 So I can add the name TARA as Tara was the translator who did the work, finish running the batch task and now I see this where TARA has been used instead of my own UserID: 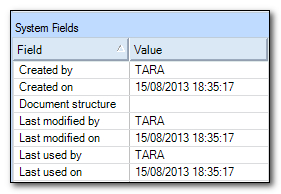 Perfect… and I’m sure something that will be a welcome addition to many users who missed this feature in the previous versions of Studio.
That’s it for now… although I could write a lot more about all the new and improved features in Studio 2014.  So keep your eyes on the SDL blog pages for more updates and if you use twitter set up a search for #studio2014  You can also follow the Studio Product Manager, @BrockmannDaniel, who has started tweeting every day to share some of the features of this release.

0 thoughts on “Sometimes it's the little things that matter!”